IFSC World Climbing and Paraclimbing Championships, hosted by Austria Climbing, took place in Innsbruck from Sept 6th to 16th 2018. With qualifications happening in Kletterzentrum Innsbruck and finals – in Olympiaworld, Walltopia was a proud supplier of the climbing walls for what has claimed the most successful and spectacular competition in the recent history of climbing. More than 25 million people watched the competition, 18 of which on TV, 2.3 mln watched the live broadcast and the rest watched the recordings online. Innsbruck World Championship was the first climbing competition that was broadcasted on TV. 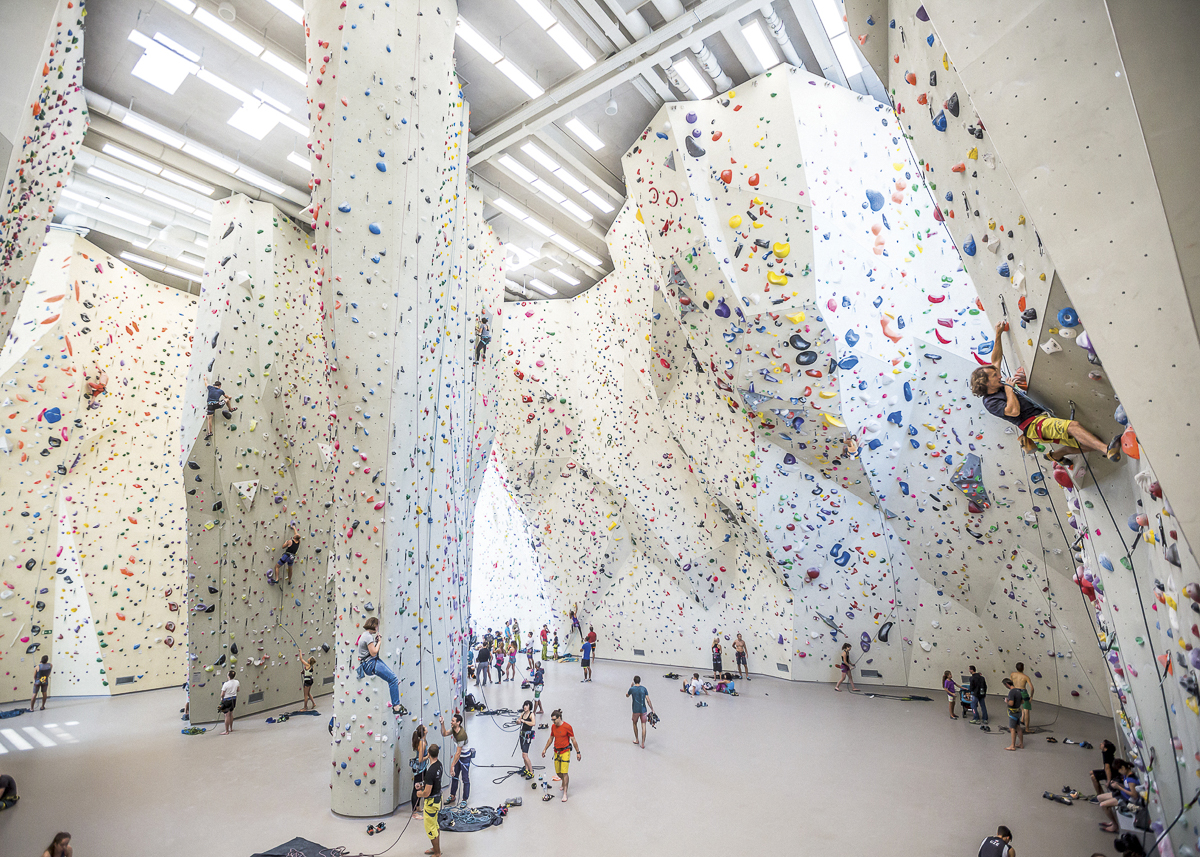 The completion of Kletterzentrum Innsbruck by Walltopia in 2017 provided the region with one of the best training facilities worldwide with a total of over 5700 sq.m of climbing surface. The results of having that at their disposal were more than obvious during the World Championship with team Austria waking away with 4 medals, 3 out of which Gold. The collaboration between Walltopia and Austria Climbing continued with the creation of the walls that facilitated the finals in Olympiaworld Hall. With competition route setting in mind, Walltopia designed walls that combine form, function, and aesthetics in a simple way that served a great event. Walltopia team attended the comp to see the product of their hard work including people from the HQ office in Sofia, Bulgaria, and representatives from Spain, Italy, Germany, Austria, Japan, Malaysia, UK, France, and UAE.

The IFSC Climbing World Championships take place every 2 years but this one marked a new milestone in both competition format and organization. For the first time, the event featured Combined finals – the format that will appear in the anticipated Tokyo2020(1) Olympics. The top 6 men and women faced the challenge of competing in all three disciplines in the order of Speed, Bouldering, Lead, on the newly built Walltopia walls in Olympiawolrd. The former Olympic Hall enjoyed a full house of cheering people watching the impressive display of athleticism shown by all climbers. The Innsbruck residents proudly watched their local Jacob Schubert take the Gold medal in Combined followed by Adam Ondra (CZE, 2nd) and Jan Hojer (GER, 3rd). Another local – Jessica Pilz also scored well winning Gold in Lead and Bronze in Combined only outperformed by Sol Sa (KOR, 2nd) and Bouldering World Champ Janja Garnbret (SLO, 1st).

Another debut for the Innsbruck 2018 World Championship besides the Combined finals is that a climbing comp was broadcasted on TV for the first time on 3 media – EuroSport, Olympic Channel, and NBC: Olympic Channel. Walltopia 3D artists took care to create animated explanatory graphics shown before each comp describing the features of each wall and showcasing all routes in detail. These made it easy for non-climbers to understand the concept, challenge, and goals for each discipline and made the new Olympic sport attractive to watch for a broader audience than ever.

With a perfect organization from Austria Climbing, great facility from Walltopia, and top performance by all athletes, the Combined discipline and climbing, in general, proved to be a showdown for skill, power, and endurance that is attractive to watch and promises to bring the lights to climbing during Tokyo2021.

4Back to all exhibits
Walltopia / About Author
More posts by Walltopia
Управление на съгласието за бисквитки
We use cookies to optimize our website and our service.
Manage options Manage services Manage vendors Read more about these purposes
View preferences
{title} {title} {title}