The tallest climbing walls in the world

With its 80 meters (262 ft), the outdoor climbing structure at CopenHill in Copenhagen, Denmark is the tallest climbing wall in the world. At a height of 42.16 m (138 ft) Clymb in Abu Dhabi, UAE is the tallest indoor climbing wall, even listed in the Guinness World Records. Designed, engineered, produced, assembled, and route-set by Walltopia, both climbing walls are currently the tallest artificial climbing structures in the world. Back in 2006 however, the highest climbing wall was only 30 m (99 ft) located in a former water tower in Leipzig and was again created by Walltopia. The gym is called Kletterturm and operates to date.

“The CopenHill wall design was a challenge as we were striving to find the right balance between appearance and functionality – the goal was to create appearance matching the impressive building architecture while designing wall topology that offers supreme climbing experience,” says Vasil Sharlanov who worked on the design. Currently Head of sales, Vasil is a talented architect who was head of the design department for 5 years.

We had to both follow the unique pattern of the building with “bricks” and “openings” and also introduce specific climbing features, roofs, aretes, cracks, and other fun to climb elements. Since the wall is 80m, it’s difficult to climb it at once, so it was split into 4 pitches, roughly every 20m. “It was inspired by natural multi-pitch routes-they usually use naturally formed ledges for pitch endings,” explains Vasil Sharlanov.

Challenges emerged in terms of production and installation as well. As the goal was to match the building design visually and functionally, we didn’t want to obstruct the natural light coming into the building. Therefore, we had to get creative with the materials using plexiglass on a scale bigger than ever in combination with fiberglass. We have used plexiglass before but usually, it’s a feature element for a very small part of the wall. “Plexiglass is complex to work with, especially if you need to bend it, but thanks to the technological advancements we’ve been investing in at our factory and the skilled engineers at Walltopia, this was a problem that was easily solved.”, says Ivan Natov – project manager of the wall.

The rest of the 1200 sq.m / 12 916 sq.ft climbing surface is made entirely of fiberglass which is the most weatherproof material for climbing wall panels on the market. To make sure the wall sustains the harsh Scandinavian climate, the construction is made of hot-dip galvanized steel. 55 tons of Bulgarian steel and 24 tons of fiberglass and plexiglass were hauled and mounted 80 m above the ground via a special platform – sort of an outdoor construction lift – mounted for the purpose and removed after. 8 Walltopians put their hard work and skills in weather conditions that are far from favorable – Copenhagen is a windy and cold place especially in the non-summer months. There were days that the platform was shaking so much due to the heavy winds that it was not even possible to lift it safely to the installation position.

“There were numerous challenges and a lot of problem-solving along the way but that’s what we enjoy and what we’re good at.”, says Ivan Natov

Clymb Abu Dhabi is a multiple Guinness World Records holder: for the tallest indoor climbing wall and the highest indoor sky diving tunnel. From a Walltopian point of view, Clymb was a project with challenging layout design as it is designed to serve a community that doesn’t have a big rock climbing community and traditions. The gym is split into five sections with varying heights and difficulty suitable for both beginners and experts alike. Planned to serve as a leisure attraction, Clymb is conveniently accessible through Yas Mall – the top destination for shopping and entertainment and adjacent to Ferrari World Abu Dhabi – a theme park which also features Walltopia Fun Walls. 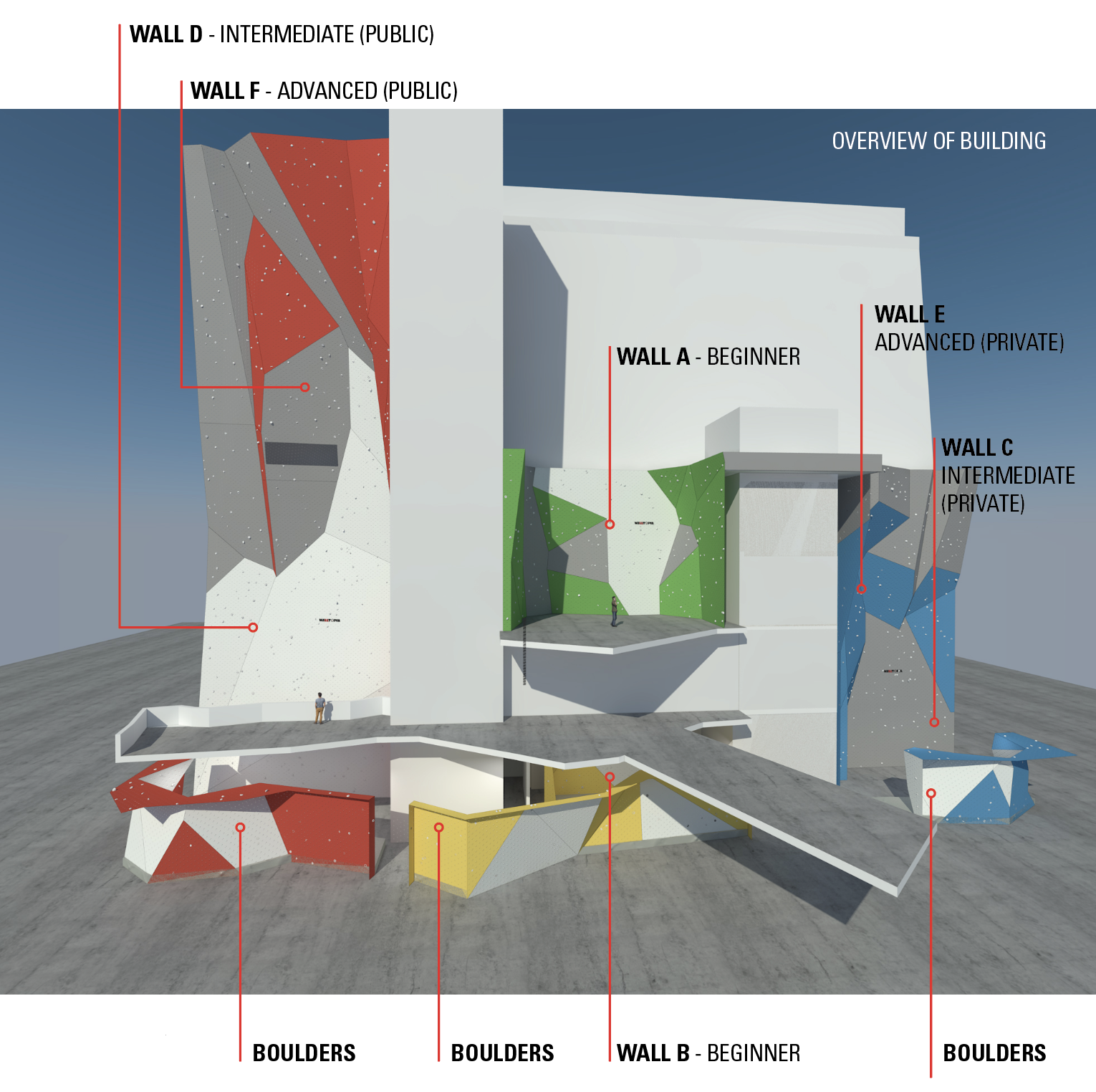 The unique, geometrically designed building is easily accessible through Yas Mall in Abu Dhabi. Its design is inspired by “the mountains of the UAE”, Mohamed Abdallah Al Zaabi, chief executive of developer Miral, tells The National. Inside, the white, geometrical theme continues, giving it a futuristic look and feel.

Clymb Dubai is home to five climbing walls, with “The Summyt” proudly being the world’s tallest indoor climbing wall. Set at 43 meters, this one is best for professionals and advanced climbers and features the colors of the UAE flag.

4Back to all exhibits
Walltopia / About Author
More posts by Walltopia 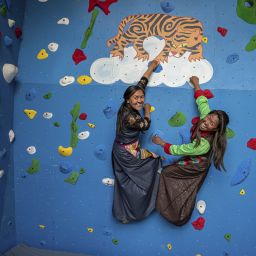 Khumbu Climbing Center (KCC) is located at 3,950 m altitude in the village of Phortse in the Himalayas. 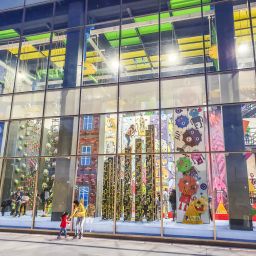 What Can Climbing Do for Children?
0
21 Aug 2020
Управление на съгласието за бисквитки
We use cookies to optimize our website and our service.
Manage options Manage services Manage vendors Read more about these purposes
View preferences
{title} {title} {title}