OUR FIRST CLIMBING GYM IN THE USA: ACHIEVING THE IMPOSSIBLE 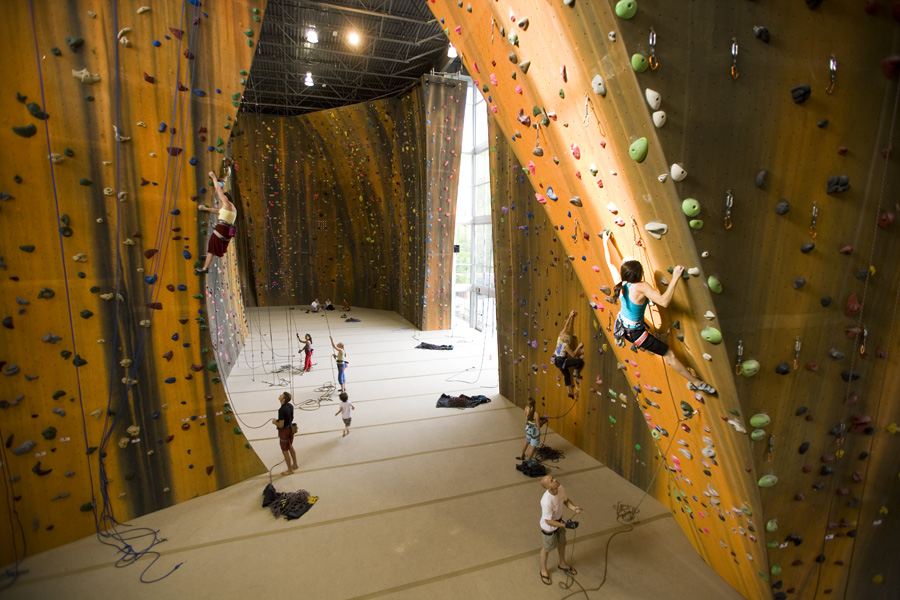 In 2006 Walltopia decided to take part in the Climbing Wall Association Summit for the first time – the annual conference of the climbing industry in the United States. A stranger to everyone one there, the company from Eastern Europe showed up with a tiny booth in the corner of the exhibition hall. Very few people stopped at it and those who did – looked with distrust at the employees, speaking weird accent and overdressed in suits and shirts, which was completely incompatible with the casual but professional look of their American colleagues.

A customer named Jeff Pederson did however stop by our booth, disappointed after numerous meetings with other wall manufacturers who sent him away, saying that his idea could not be realized with the currently available production technologies.

Walltopia had never produced a climbing wall as described by Jeff before, but we embraced the idea of a wall that mimics Utah sandstone canyons that are signature for the US climbing community. Although we did not have a clear plan of how it could happen, we had a concept and we found the proper technology to produce the walls exactly as the client imagined them. Momentum Climbing in Sandy, Utah, has become an iconic gym for the climbing community in the region and still operates with the very same climbing walls that replicate Indian creek.

In the years that followed Walltopia built 6 climbing gyms for Momentum and the number of its completed projects around the world is currently
1800 in 78 countries.

“We tend to always look forward in our business. Every time we do something and we have to do it again, we try to look back and learn what were the mistakes and what we can improve. Where can we push, how can we elevate climbing? And I see that Walltopia is doing very much the same. So, it’s nice working with a company that shares the same vision, not staying in the same place but always setting a higher bar and moving forward.” – Jeff Pedersen, co-owner of Momentum Indoor Climbing

4Back to all exhibits
Walltopia / About Author
More posts by Walltopia
Управление на съгласието за бисквитки
We use cookies to optimize our website and our service.
Manage options Manage services Manage vendors Read more about these purposes
View preferences
{title} {title} {title}